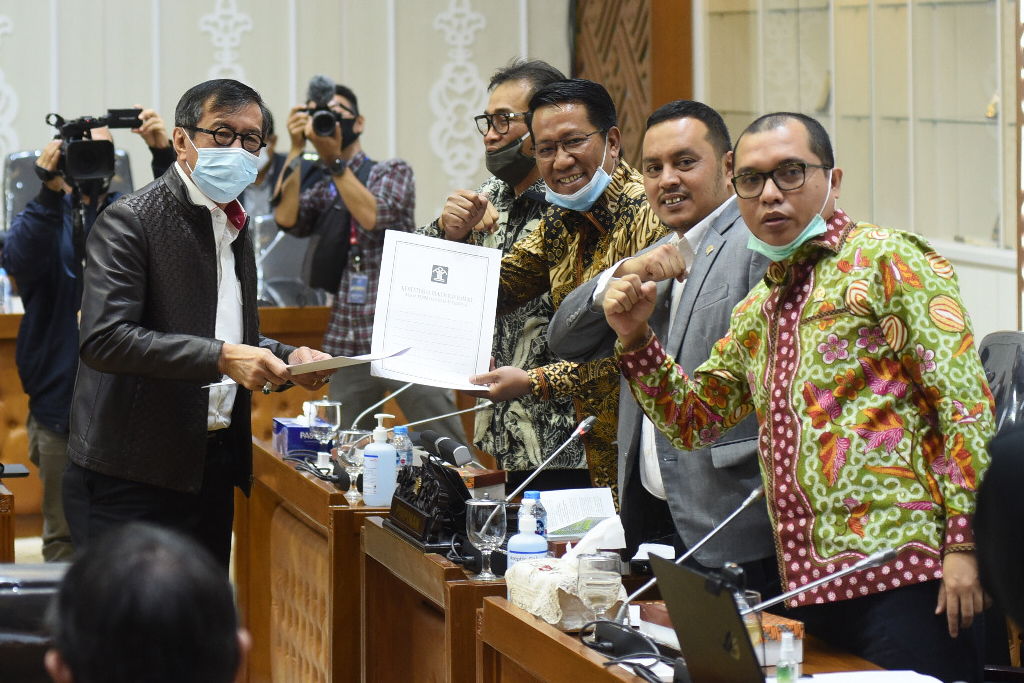 The House of Representatives may not conclude the deliberation of the omnibus bill on job creation in August as it is still working through problems, including labor disputes and editorial issues.

The House Legislation Body (Baleg) has resolved 3,172, or almost half, of 6,652 problems on the bill’s inventory problem list (DIM). A bill is usually passed into law if lawmakers and the government have resolved all problems on the list.

Baleg chairman Supratman Andi Agtas told The Jakarta Post on Thursday that he was not sure the bill could be passed in August.

“I can’t be positive of that. It depends on the debate between the factions,” he said.

Supratman said Tuesday in a hearing with the government that among the unresolved problems were also 1,430 problems that required “editorial” revisions.

The Gerindra Party politician explained that the body had grouped the 1,430 problems into five categories, among them were those with the term “license” that would be changed into “business licensing” to comply with the government’s request. The term will be used in the articles that would hand over licensing authorities from local administrations to the central government.

“If we could agree on them all, we would still have 2,050 problems,” said Supratman.

The jobs bill, which consists of 15 chapters and 174 articles laid out over 1,000 pages, seeks to revise 79 laws and more than 1,200 articles considered to be impeding efforts to attract investment.

The government expects the House to deliberate the omnibus bill in August or early September to help economic recovery amid the COVID-19 pandemic.

Both the government and the House have delayed discussions on articles related to labor in response to mounting pressure from workers’ unions over fears that the articles would lure investment at the expense of workers’ welfare.

The ruling Indonesian Democratic Party of Struggle (PDI-P) and the NasDem Party, both in President Joko “Jokowi” Widodo’s coalition, called on the government to remove labor provisions from the omnibus bill to smoothen the deliberation process.

“Around 30 percent of the DIMs need to be discussed, including the difficult chapters, namely chapters four [labor], 10 [central government and investment] and 11 [public administration],” he said.

“We could conclude the deliberations this year but to finish by August would be too difficult.”

The body could also go back and discuss the resolved DIMs again should they need adjustments after the deliberation of remaining chapters.

Willy Aditya of the NasDem Party, who is also the body’s deputy chairman, said the government and the House would continue the deliberations despite the dispute surrounding labor issues. However, NasDem still urged the government to drop labor provisions from the bill.

He said labor provisions in the bill should instead be included in revisions to other laws, for example, revisions to the Labor Law or the Industrial Dispute Settlement Law.

“The August target is too soon considering the remaining problems,” he said.

Achmad Baidowi of the United Development Party, who is also among the body’s deputy chairs, said lawmakers would be careful in discussing the bill.

“We at Baleg don’t want to talk about the quantitative targets but the quality. That is our concern.”

Labor unions plan to hold weekly street rallies that will peak on Aug. 14, along with the opening of the House’s plenary session to oppose the bill.

Confederation of Indonesian Trade Unions (KSPI) chairman Said Iqbal said several unions would hold a massive rally Aug. 14 in front of the House compound in Senayan, Central Jakarta, and the Office of the Coordinating Minister of Economy to call both the House and the government to stop the deliberation.

“The number of protesters on Aug. 14 could reach tens of thousands of people. They will come from Banten and other parts of Java,” he said.

The unions will also hold simultaneous rallies in 20 provinces and 200 districts or cities.